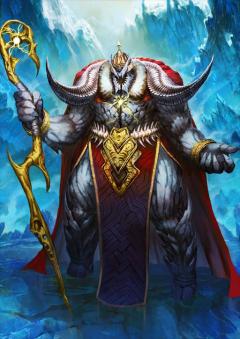 Ivan is perhaps one of the most powerful Riders so far--- his skillset provides him with access to great potential for both damage and utility that can aid the team against many foes.

Ivan is quite the juggernaut, and not just with his sheer size--- not only is he able to hit with great potential for damage, he also has good utilities that can turn the tides of battle to his team’s favor. He has no visible weaknesses that hinder his performance. To fully understand how good he is, we’ll go over his strengths in detail.

In regards to damage, Ivan does quite a good amount--- with his skills alone he can power up his Buster cards by 40%, but through his NP’s debuff he can stack up to at least a 60% increase for 3 turns. His Buster up skill also comes packaged with a buff that gives him stars per turn, so with his class’s naturally high star absorption rate, he would be able to easily deal high-powered Buster crits. And it doesn’t stop there--- he’s also able to buff his NP gain for most of the time he’s on the field, which with his 2 Arts cards and crit potential allows him to recharge his gauge at good speeds. This means that as long as his buffs and debuff are active, he would hit for more damage on his next NP, allowing him to potentially stack more of his Buster resistance down.

As for utility, Ivan has mainly three. His first is the ability to remove his debuffs. The ability to remove debuffs is quite useful as a tool, as it lets Ivan rid himself of any pesky effects that may aim to hinder his damage or survival. It’s not that noticeable, but it can add a lot to how good he performs on his strong points, and even counter debuff-based gimmicks from difficult enemies. His 3rd skill grants him 2 more utilities: an ATK down and an AoE buff removal. An ATK down is rather straightforward--- it reduces enemy damage which can allow the team more survival, especially when it’s stacked with similar effects from other Servants. The AOE removal of buffs however, is quite a splendid tool. It allows for Ivan to counter and defend from buffstacking and/or gimmicky buffs that may disable or kill the entire team.

He’s not perfect however, of course. Being able to use his NP twice within three turns can be quite difficult to pull off most of the time. His 3rd skill’s effects are also packed together, which makes it hard to use regularly, as one would usually prefer to save the buff removal for key moments.

Zveri Krestniy Hod deals decent damage at 23.7k damage against all enemies when buffed with his own skills and at NP1. It has a built-in NP buff that multiplies with his Buster buff, and applies an AoE Buster resistance down. It’s quite straightforward, really, and serves mostly to buff his own damage.

An increase in NP damage can boost Ivan’s potential for damage overall, especially due to the fact that he is able to charge his NP gauge quite quickly.

A QAABB deck allows Ivan the capability to both charge his NP with his Arts cards and deal damage through his Busters. It’s the perfect fit for him.