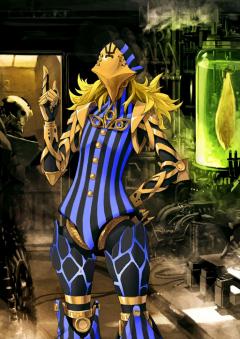 Despite being an amazing aid in the story, Avicebron sadly does not perform that well ingame. While his skills may have a few interesting gimmicks, he sadly has neither enough damage not utility to shine well--- one can even note that his kit is rather old-fashioned and improperly made.

It’s rather hard to find use for Avicebron. At a glance, his skillset seems to revolve around using his NP. The problem is the fact that his NP barely does anything--- it hits for very unfortunate damage, and grants only an abyssmal increase in NP gain. While the increase in NP gain may suggest that he is able to use his NP often, that is only at the surface. With his below-average NP gain, long skill cooldowns, and Buster NP, Avicebron is unable to actually cycle his NP frequently, and is limited only to a back-to-back every 8 turns.
Even if one was to use his NP back-to-back within 2 turns, the overall amount of benefit it does through its damage and effects are comparable to what other AoE Casters can do in a single turn.

Still, his 3rd skill is rather interesting however, although it doesn’t argue much for his place in a team. His 3rd skill can act as somewhat of a clutch save for his allies, but since it requires his death to activate, it’s not exactly something one would invest in him for.

Golem Keter Malkuth sadly does a small amount of damage, hitting for 14,886 damage against all enemies at NP5. It also grants a secondary effect that boosts the entire team’s NP gain by 10% at 100% overcharge. Its frankly quite small and disappointing, as a 10% boost won’t really be noticeable in the long run. While one can argue that Avicebron is able to use his NP twice for a 20% total boost, it’s somewhat offputting that he requires 2 usages of his NP and two turns to accomplish an amount considered average by most.

An increase in NP damage would grant Avicebron at least some use for his NP, making it a bit more worthwhile to use him.

A QAAAB deck allows Avicebron to charge his NP quite quickly through frequent Arts chains. It’s rather conflicting though, as a QAABB deck would have improved his damage and given him more opportunities to use his Buster buff. His hitcounts on his Quick, Busters, and Extra card are quite nice, though.

5 Star Servants Tier List: Best Servants [5/9 updated!] 79
no
Saint Quartz Farming Guide 7
ty umu
Leonidas 9
Could I get a pic? Would love to see him maxed, to get an idea, as I'm currently at level 90...
Caster of Okeanos (Circe) 2
Idon't have much problem regarding her np gain, with her triple arts deck, she'll be ab...
> Go to the latest comments