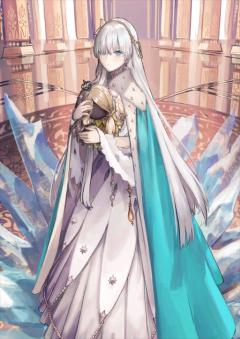 Anastasia Nikolaevna Romanov is currently unavailable on the Global ver.

Anastasia is nothing short of incredible, and is close to being an absolute all-rounder--- she’s able to fit well in most teams, especially Arts ones, and simultaneously deal damage, aid her team’s survival, and counter a few gimmicks from the enemy. In fact, the only thing that prevents her from being all-out gamebreaking would be perhaps the fact that her class hinders her overall damage potential.

Anastasia is almost overwhelming, to be completely honest. Not only does she bear a considerable amount offensive potential, but she also has a large amount of utility due to the number of useful tools she has on her kit. Let’s go over it in detail.

As one would expect, Anastasia goes about dealing damage the same way as other Arts Servant do. She hits with decent numbers on her NP, and has great NP gain that would allow her to cycle it quite often. She has quite the potential as well, with a passive 12% Arts buff, a QAAAB-A-NP deck, an effective gain of 1.53% on her cards, and a 50% NP charge skill. A look into her overall potential shows how much she’d gain in an NPAAEX chain against 3 enemies: (self-buffed): 64% (unbuffed): 46%
One might say that her damage potential isn’t that big due to her Arts buff lasting only for a turn, but one has to remember that her ATK up lasts for 3, and that her NP also decreases DEF. This means that her damage can actually grow stronger as she uses her NP even more.

Aside from her damage, Anastasia is also able to aid her team’s survival and counter a few gimmicks with some utility on her kit. Her ATK down can come in handy when stacked along with many other Arts Servants, as it would further weaken enemy attacks against the team. She’s also able to pierce Invincible for a turn, as well as skill seals and inflict stun. Her debuffs’ hit rate can also be further enhanced by her passive increase in Debuff success rate, and by her debuff resistance down debuff.

It’s quite amazing to see all this in one kit, and Anastasia being an Arts Servant makes it even more worthwhile. As an Arts Servant she would be able to naturally fit into Arts teams that can benefit or add on her kit’s effects. This allows her to be quite stable and consistent in her performance.

In fact, there are only two notable weaknesses from her kit: one is the fact that she’s a Caster, which somewhat limits her overall damage potential due to their 0.9x class multiplier. The other is the fact that with the amount of effects packed on to her kit, it can be somewhat difficult to benefit from them all at the same time. Sometimes there might be instances where one would have to sacrifice an effect for the other, or time your usages with utterly absurd accuracy so as not to waste anything.

Still, the queen does bring a lot to the table, and she does so without being hampered too much by any visible demerits or the like. The Queen of Ice is quite a wonderful addition to the pool of SSR Casters, and she’s one of the few who are truly able to let go of their class’s stigma.

Anastasia deals quite average NP damage, hitting 20,907.9 damage against all enemies at NP1. While the damage may be somewhat mediocre, its effects are not. It seals all enemies’ skills for a turn, and casts a decrease in DEF for 3 turns. It is also an Arts card that hits for 4 times, which can help Anastasia recharge her gauge for a small amount. With her potential in using this NP often, she can somewhat mitigate her low damage by hitting multiple times, sealing enemy skills and debuffing their defenses once again in the process. It’s quite a useful tool, truly.

An increase in NP damage gives Anastasia another multiplier to improve her damage potential, especially with her great overall NP gain.

A QAAAB deck grants Anastasia much splashability and consistency. It lets her charge her NP rather quickly, and grants her the ability to perform Arts chains with her allies.